The Changing Face
of Tyranny in
the 21st Century 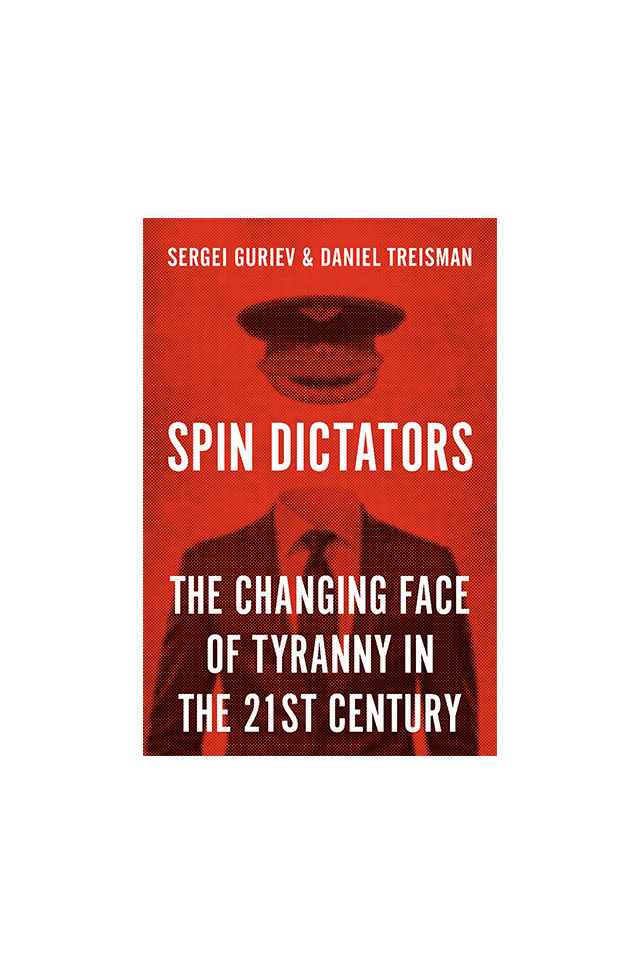 The main dictators of the 20th Century—men like Hitler, Stalin, and Mao—ruled through brutal repression. Many also imposed official ideologies and isolated their states from the outside world. But in recent decades the face of dictatorship has changed. A new breed of well-dressed, media-savvy strongmen has been redesigning authoritarian rule for a more globally connected era. In place of show trials and prison camps, these leaders control their citizens by manipulating information and faking democratic procedures. Like spin doctors in democracies, they spin the news to engineer support.

The book charts the rise of such “spin dictators” around the world—men like Hugo Chávez in Venezuela, Vladimir Putin in Russia, and Viktor Orbán in Hungary. It shows how these rulers differ from remaining “fear dictators” such as Kim Jong-un and Bashar al-Asad, as well as such masters of hi tech repression as Xi Jinping. Based on rigorous research but written in accessible language, Spin Dictators suggests an explanation for the great political puzzle of our era—how dictators can survive in an age of deepening modernity. It suggests why this new type of dictatorship emerges, how it functions, what threats such regimes pose and how the West can best fight back.

Sergei Guriev is a professor of economics and director of graduate studies in economics at Sciences Po, Paris. He is a former Chief Economist of the European Bank for Reconstruction and Development, London, and a former Rector of the New Economic School in Moscow.

Daniel Treisman is a professor of political science at the University of California, Los Angeles and a fellow at the Center for Advanced Studies in the Behavioral Sciences at Stanford. A former editor of the American Political Science Review, he is the author of "The Return: Russia’s Journey from Gorbachev to Medvedev" and editor of "The New Autocracy: Information, Politics, and Policy in Putin’s Russia." 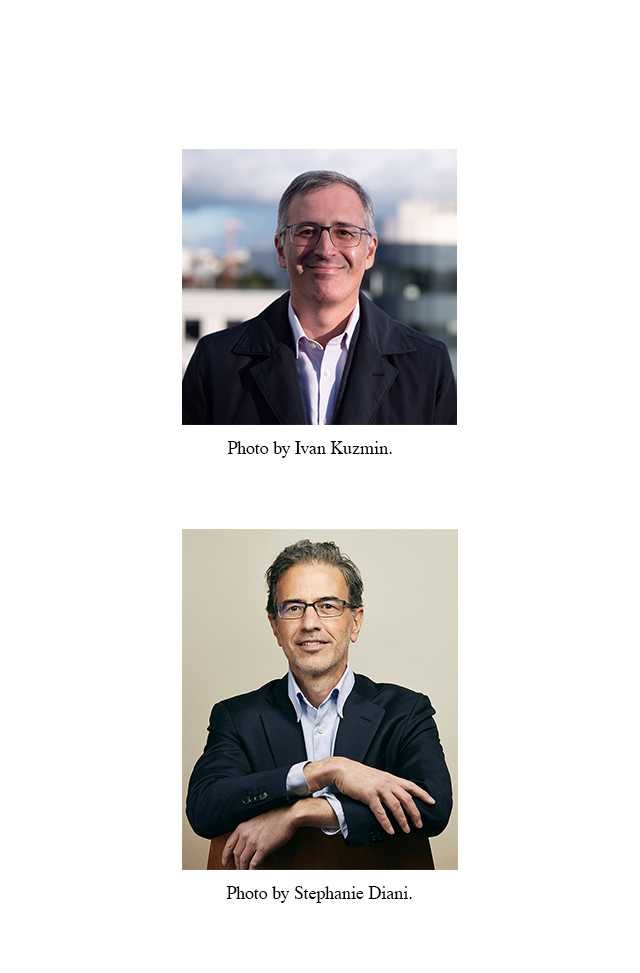 “Dictators have always told lies… Dictators have often used terror, too… But the balance between lying and killing has changed, argues a fascinating new book. For most modern autocrats, lying matters more.”
— The Economist

“Sergei Guriev and Daniel Treisman’s “Spin Dictators: The Changing Face of Tyranny in the 21st Century” (Princeton) offers a social-scientific perspective on the mechanics of the new autocrats and their common world view…. Its central observation is that the new generation of authoritarians, whether fully fledged or still aspirant, as in the U.S., usually exploit the apparent levers of democratic politics but use more discreet forms of manipulation to extend their rule. Rather than cancel elections, they rig them; rather than outlaw opposition media, they marginalize them; sooner than start a gulag, they put constraints on Google."
— Adam Gopnik, The New Yorker

“As Sergei Guriev and Daniel Treisman observe in their intelligent, important book, throughout this time something far more interesting and dangerous was happening. The most sophisticated dictators were reforming themselves, and the lesson they internalised was not the need to be democratic – that, after all, went against who they were – but the need to look democratic. ”
— David Patrikarakos, The Spectator

“For centuries, dictators have sought to manipulate their subjects, the better to subjugate them. But as Sergei Guriev and Daniel Treisman persuasively argue in "Spin Dictators," their absorbing, meticulous study of the evolution of authoritarianism in the late 20th and early 21st centuries, craft and deception have in recent decades supplanted fear and terror as the defining characteristics of today’s autocratic rulers. ”
— The Washington Examiner

“The authors carefully document dozens of strategies used by authoritarian regimes around the world to successfully pass themselves off as populist supporters of democracy when the actual goal is tyranny and absolute power. As depressing as this scenario may be, the authors do politically concerned readers an immense favor, enabling us to recognize these tactics and, with that knowledge, ultimately oppose this new breed of dictator. ”
— Booklist

“Economist Guriev and political scientist Treisman ("The Return") examine in this insightful account how modern autocracy has evolved from WWII to the present.”
— Publishers Weekly

“Manipulating instead of suppressing: In their book "Spin Dictators" a Russian economist and a US political scientist show the tricks of a new generation of autocrats.”
— Die Presse (Vienna)

“Sergei Guriev and Daniel Treisman have written the most astute account of the system that has risen to challenge liberal democracy in the 21st century... Other scholars and journalists have written about the tactics used by 21st century autocrats to secure control over the institutions of a free society. But Guriev and Treisman have assembled the most thorough analysis of the building blocks of contemporary dictatorships.”
— Arch Puddington, American Purpose

“As Sergei Guriev and Daniel Treisman highlight in their recent book "Spin Dictators," it is easier for autocrats to be genuinely popular than to rely on repression.”
— Slate 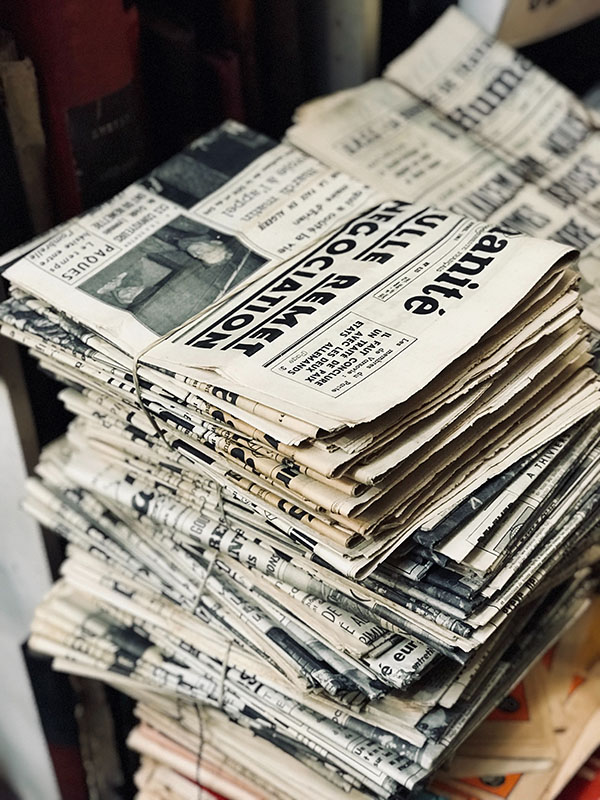 The data and figures referenced in the book are all available here. The replication files below contain the data and code to generate the figures. 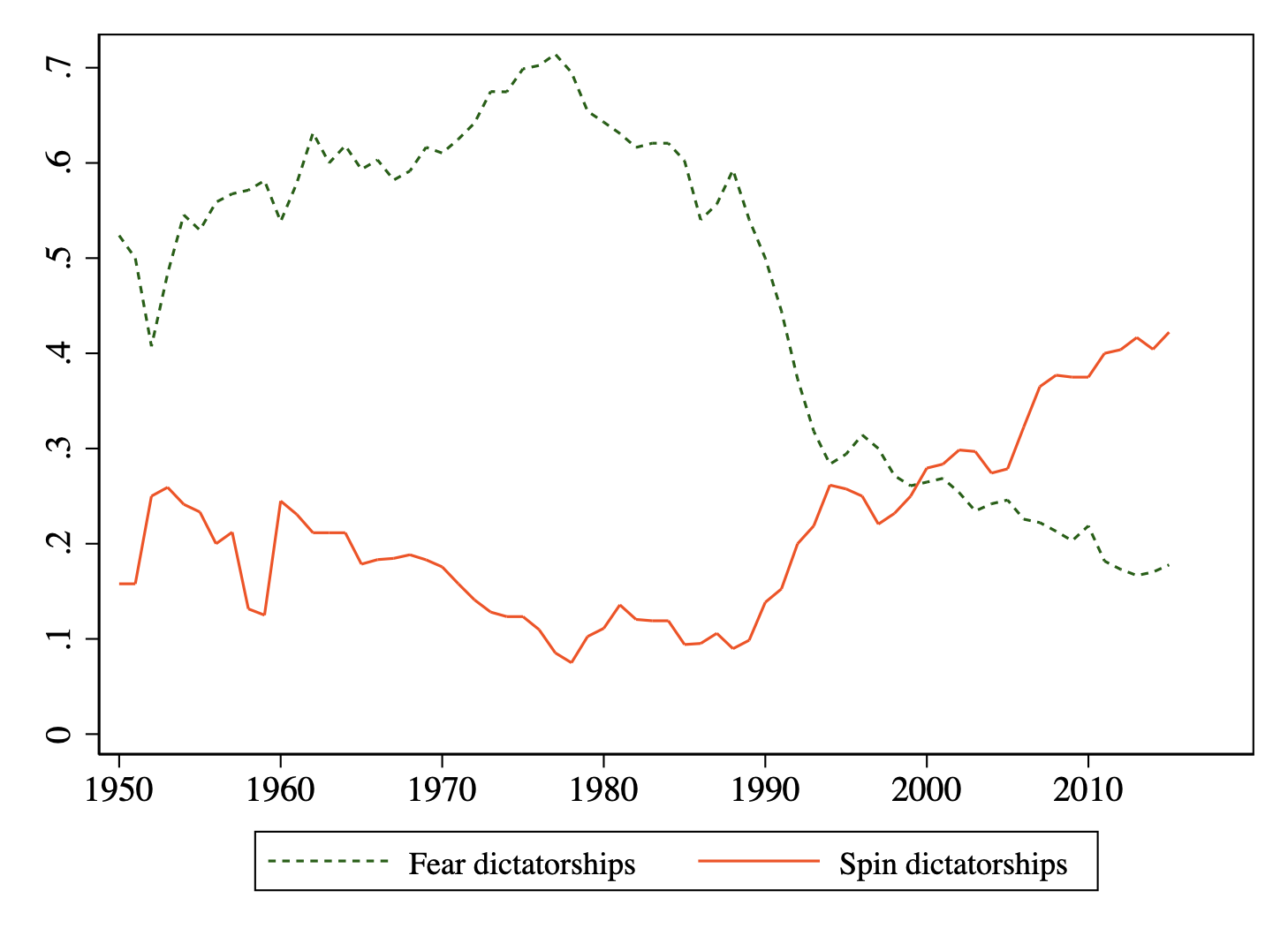 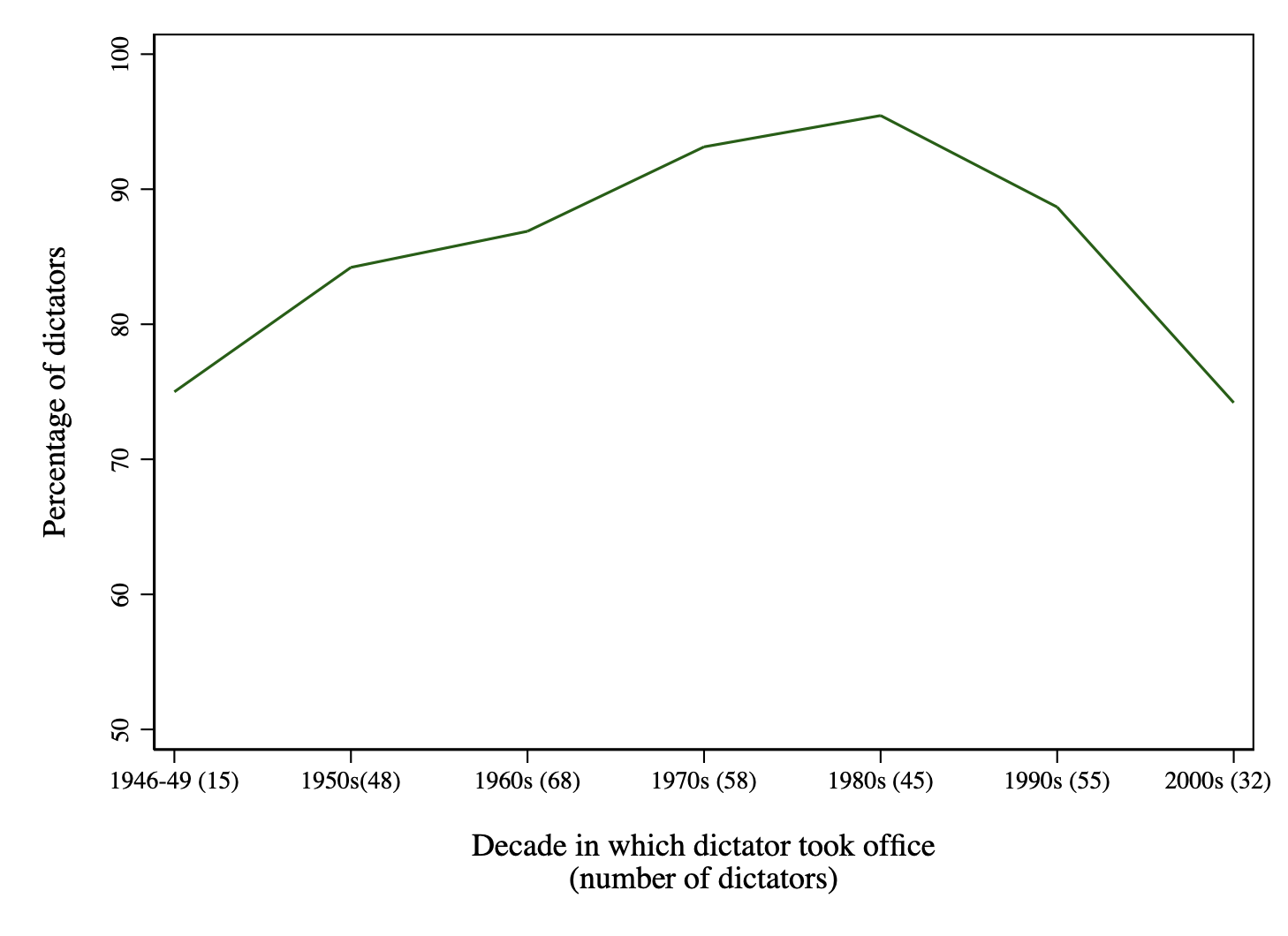 Figure OS2.1: Percentage of Dictators Under Whom Torture of Political Prisoners or Detainees Alleged 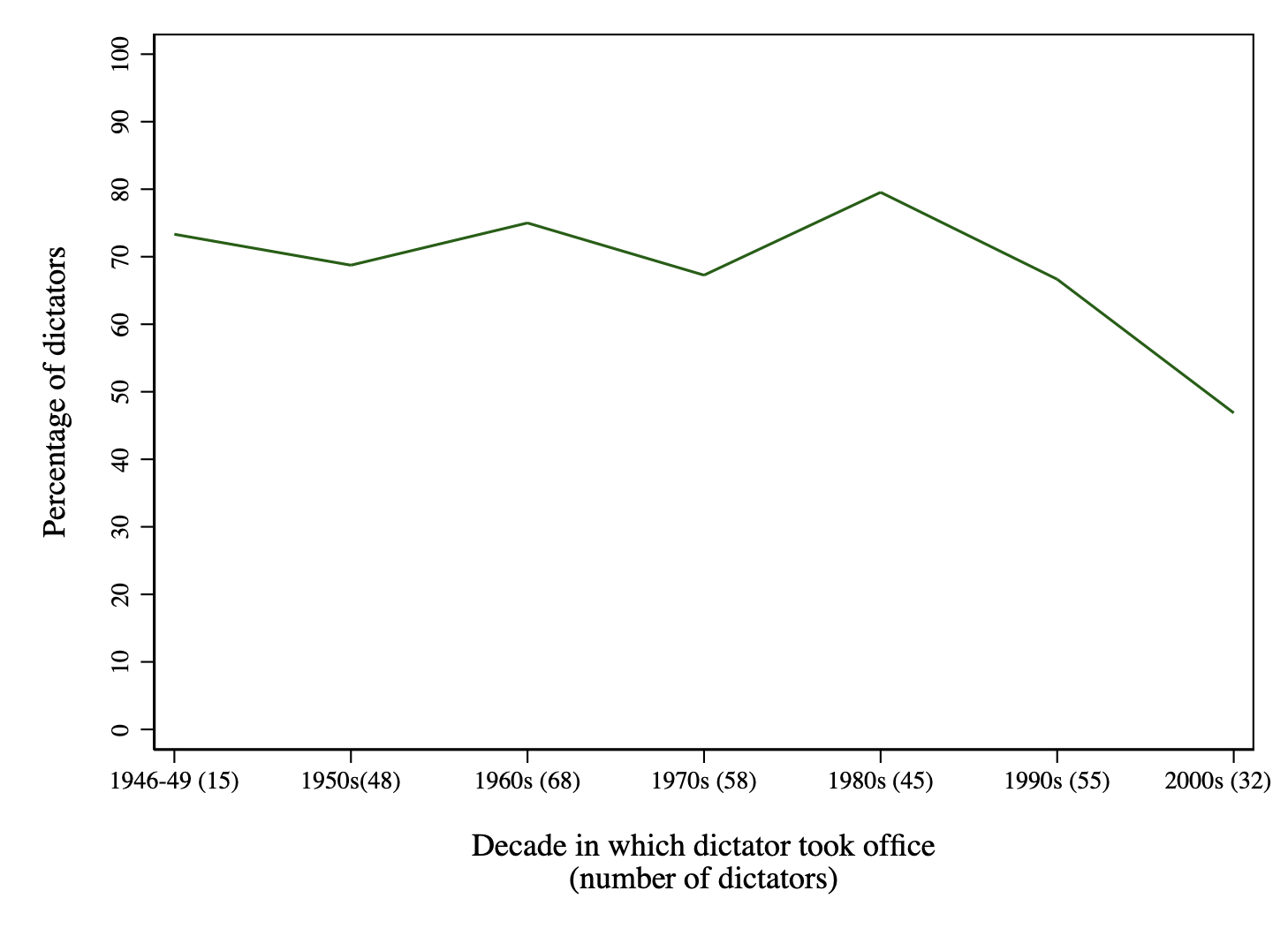 Figure OS2.2: Percentage of Dictators with More than One Political Killing a Year 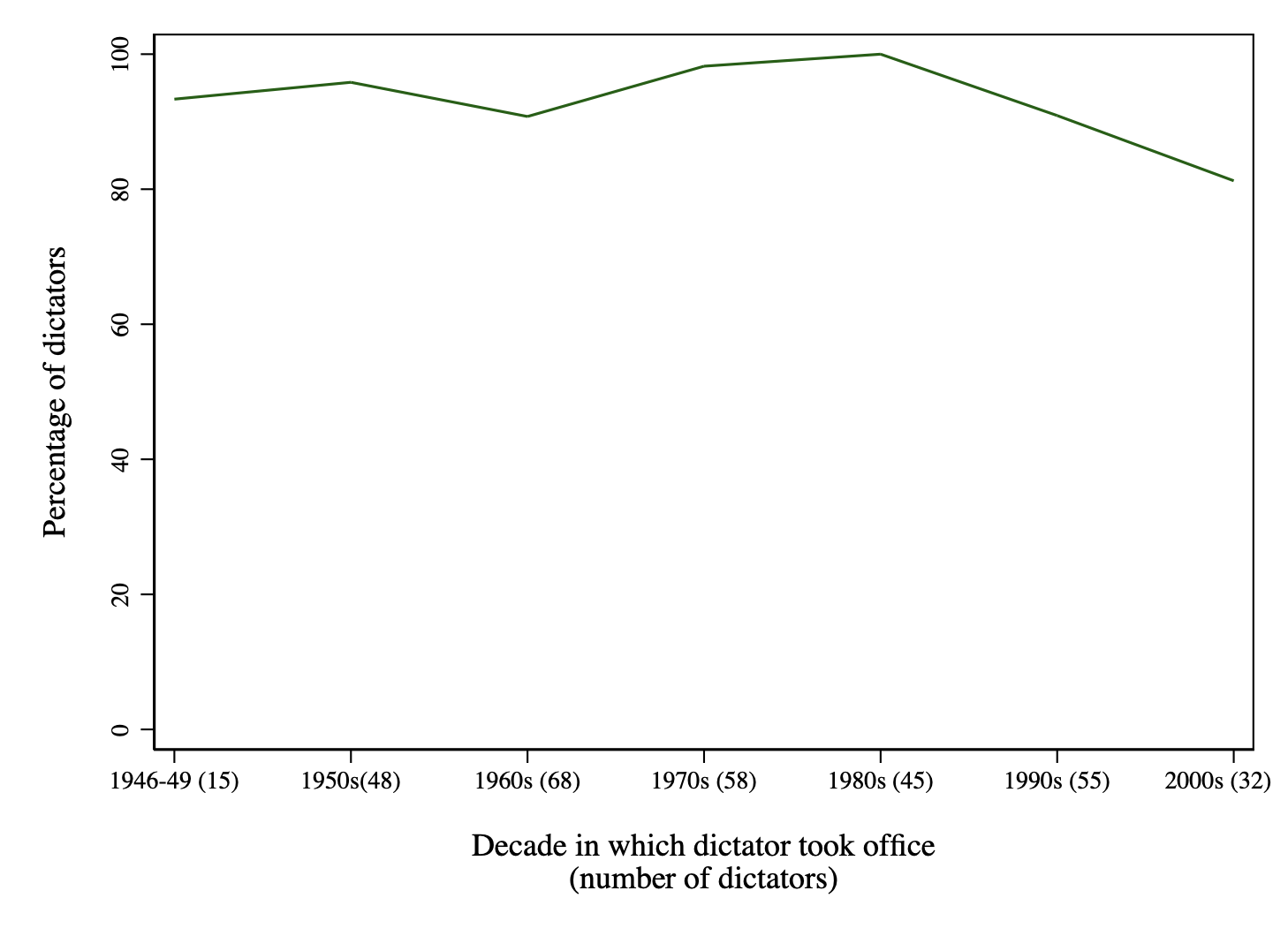 Figure OS2.3:Percentage of Dictators with More than 10 Political Prisoners in Peak Year 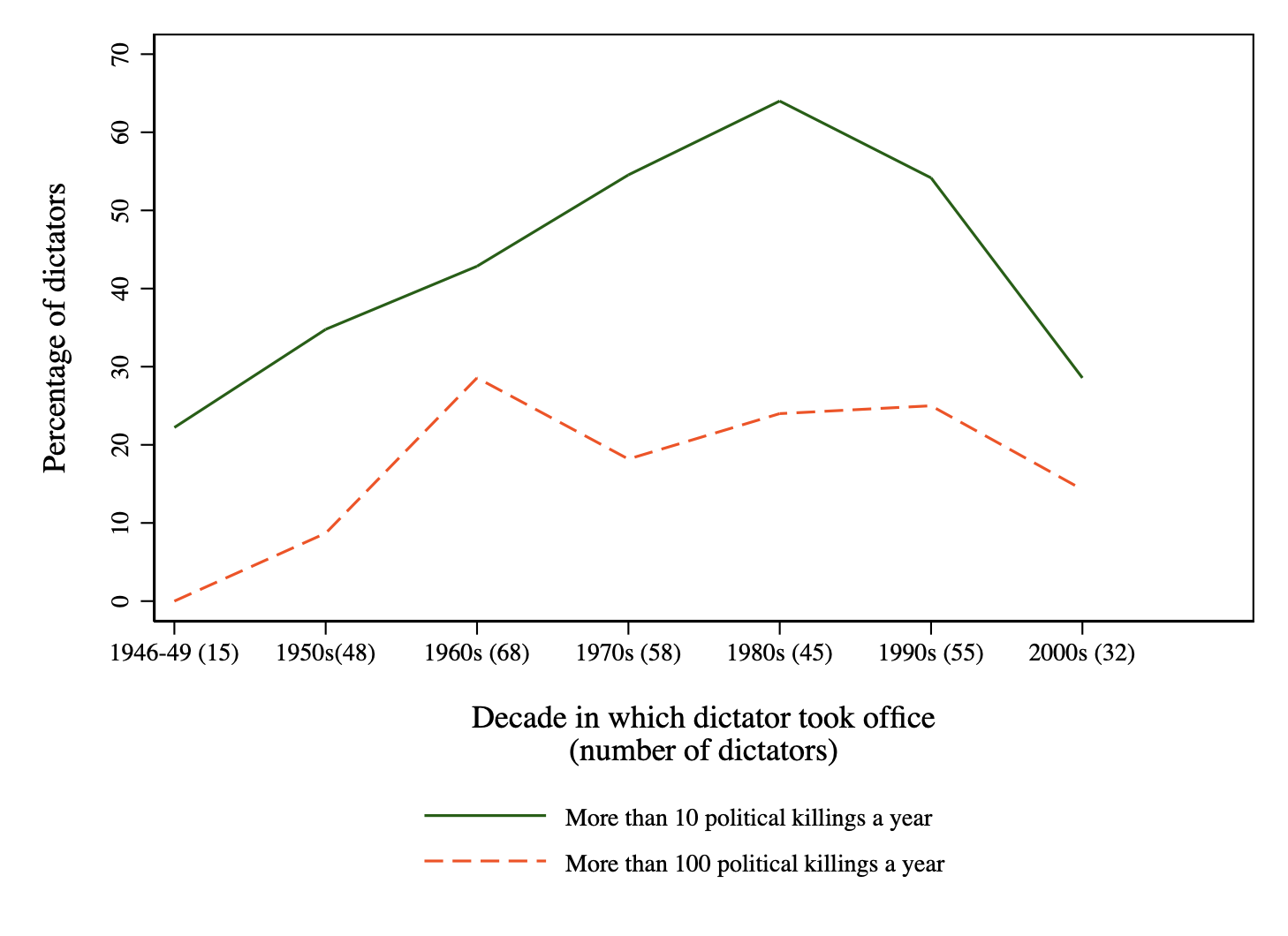 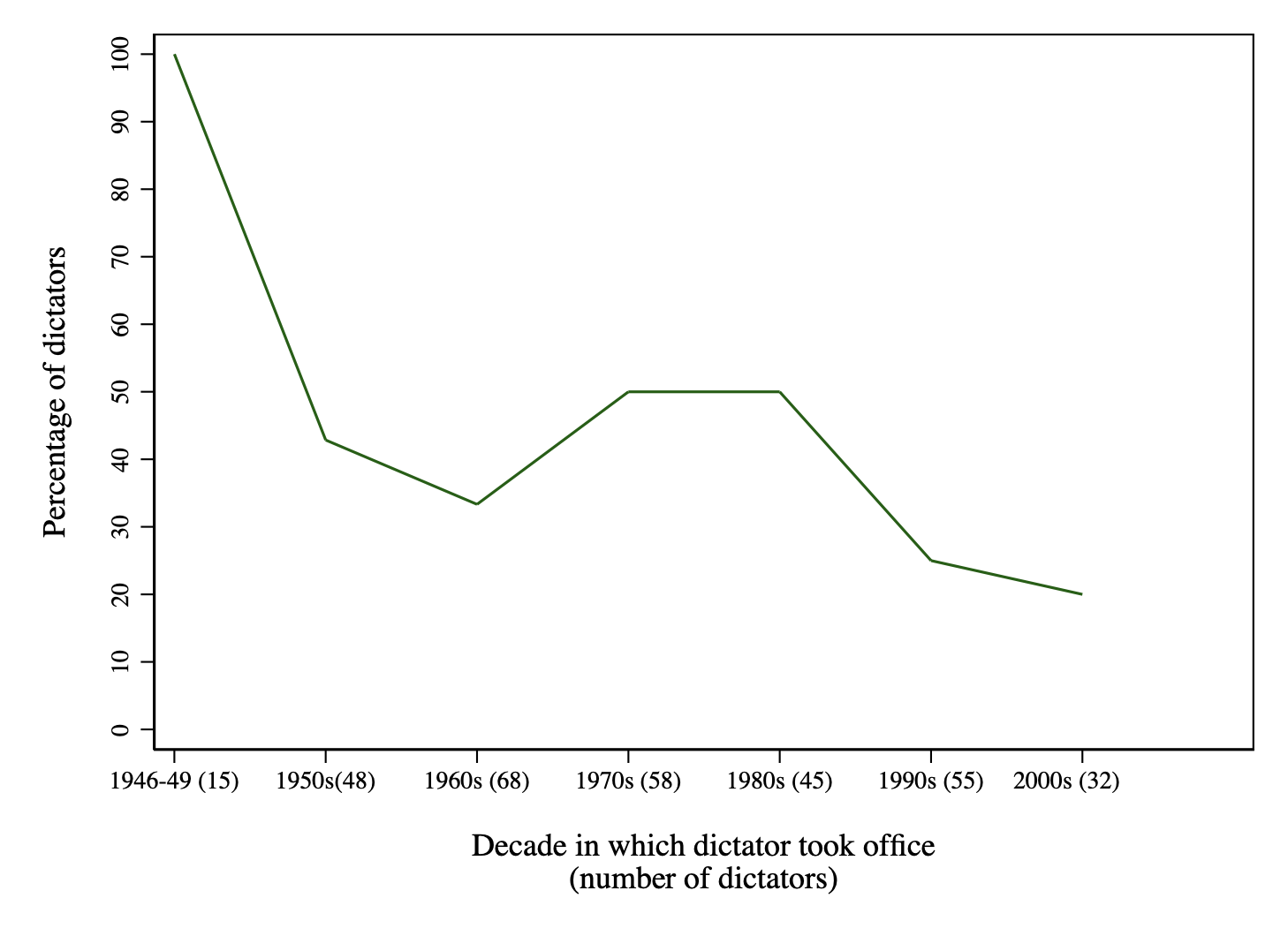 Figure OS2.5A: State Political Killings (By Region). Percentage of Dictators with more than 10 political killings a year on average 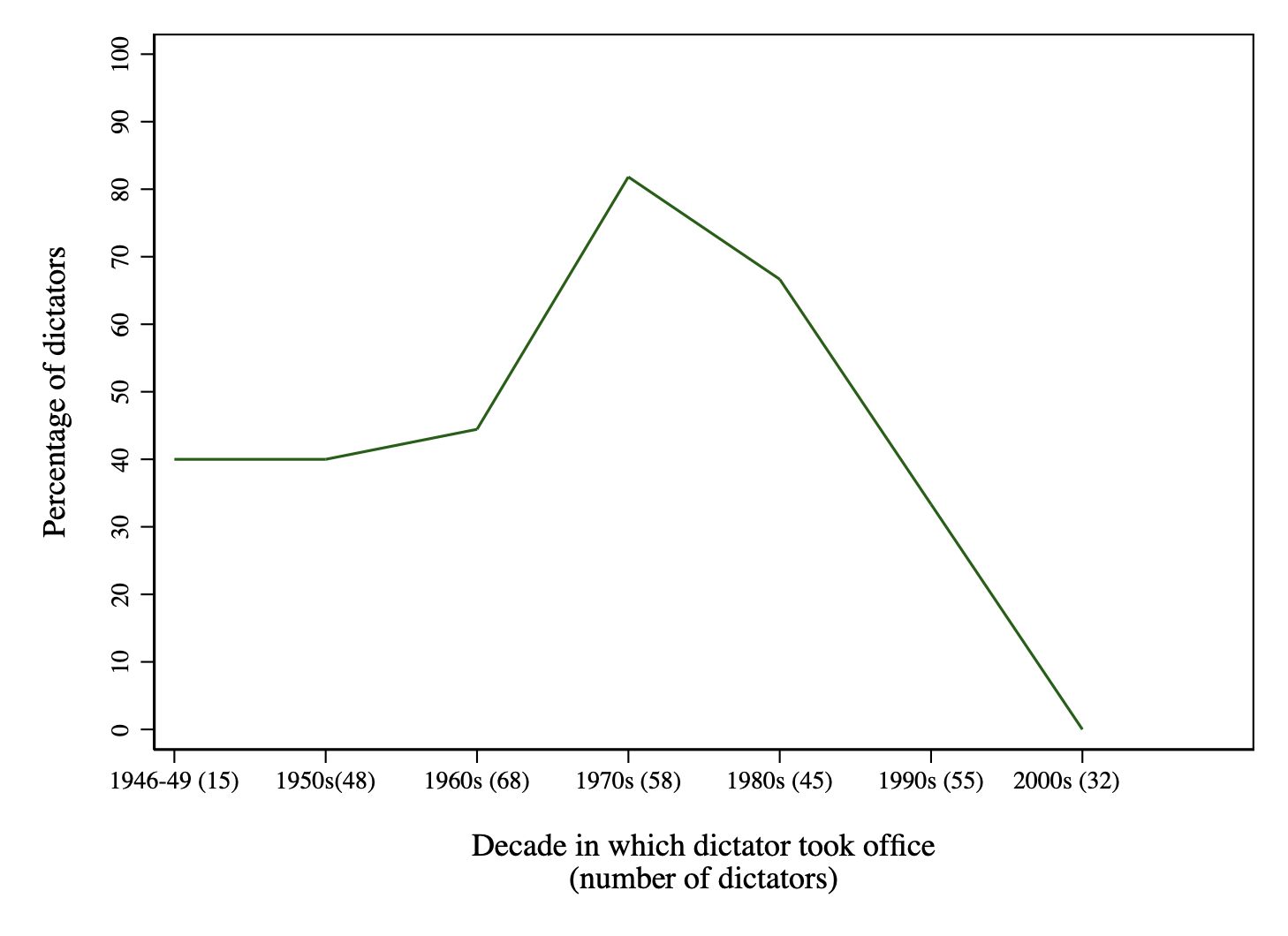 Figure OS2.5B: State Political Killings (By Region). Percentage of Dictators with more than 10 political killings a year on average 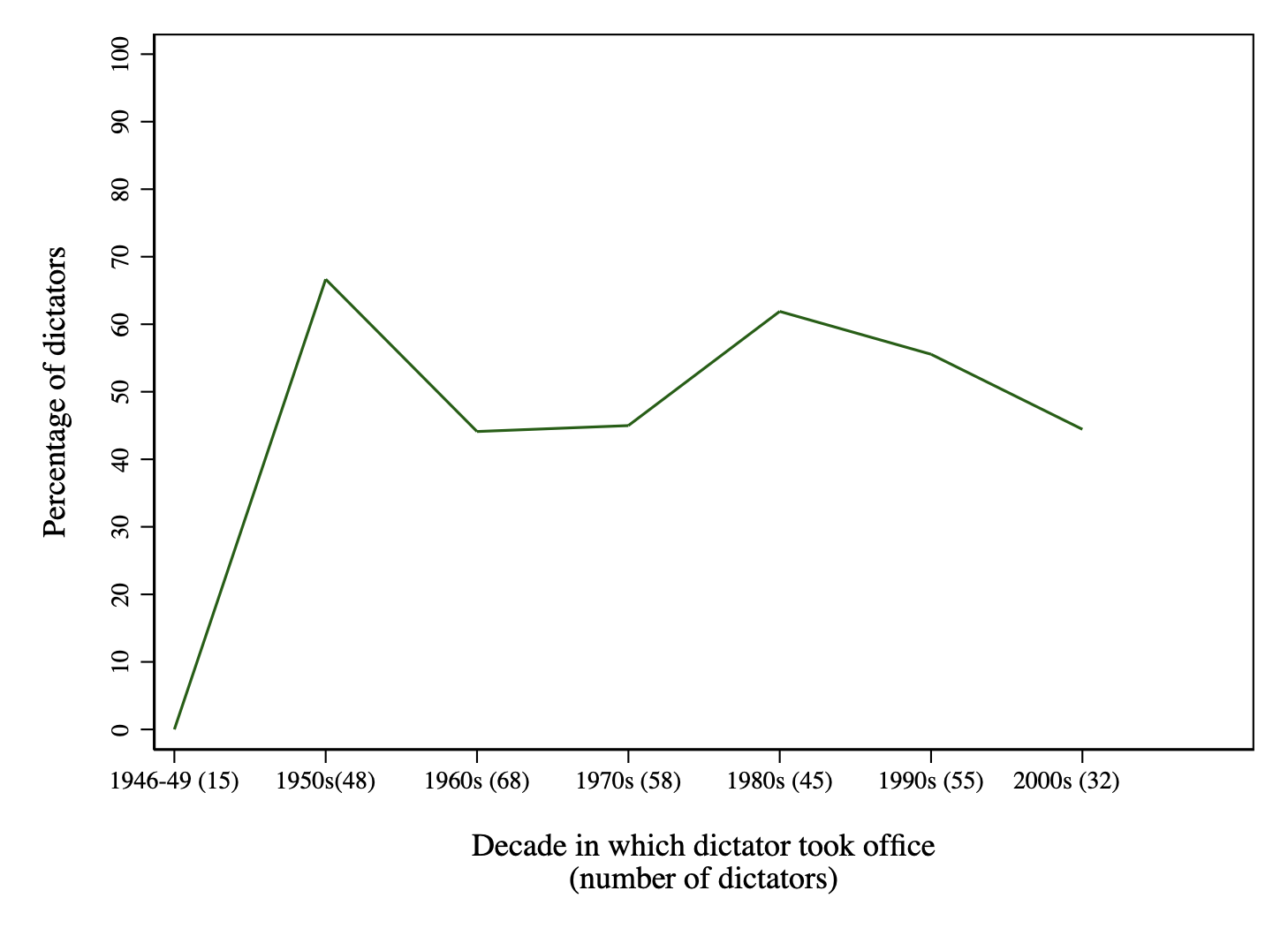 Figure OS2.5C: State Political Killings (By Region). Percentage of Dictators with more than 10 political killings a year on average 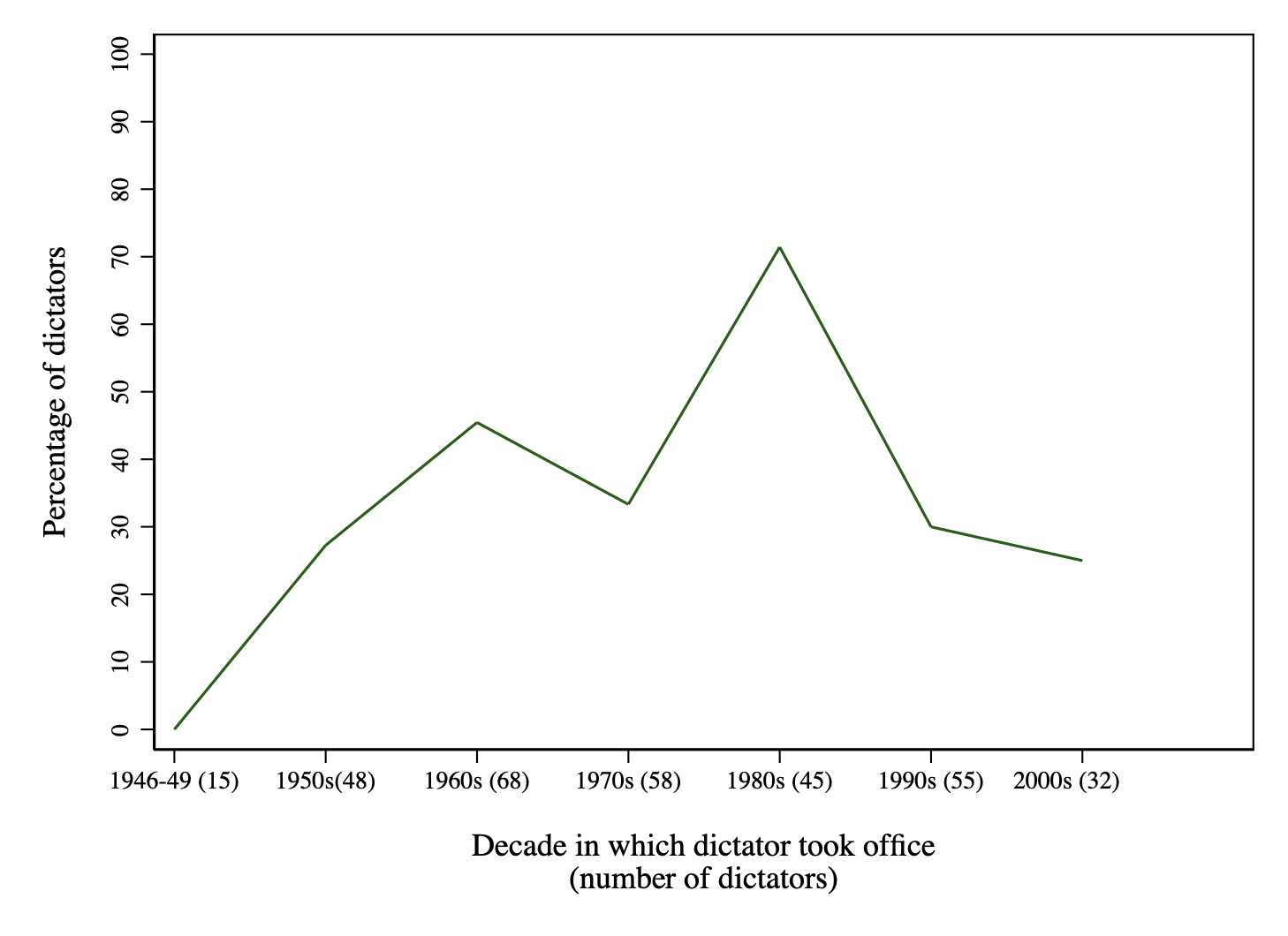 Figure OS2.5D: State Political Killings (By Region). Percentage of Dictators with more than 10 political killings a year on average 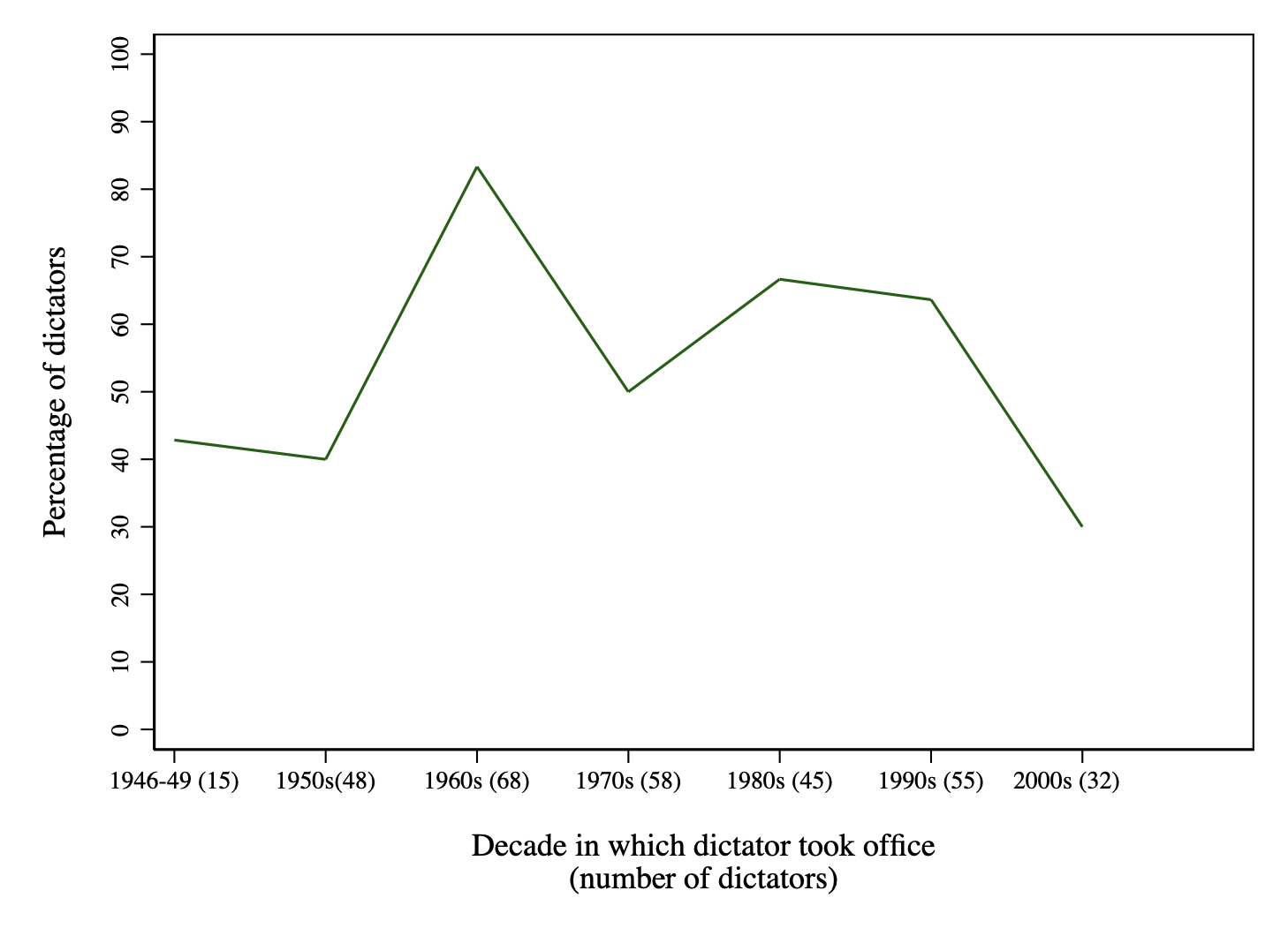 Figure OS2.5E: State Political Killings (By Region). Percentage of Dictators with more than 10 political killings a year on average 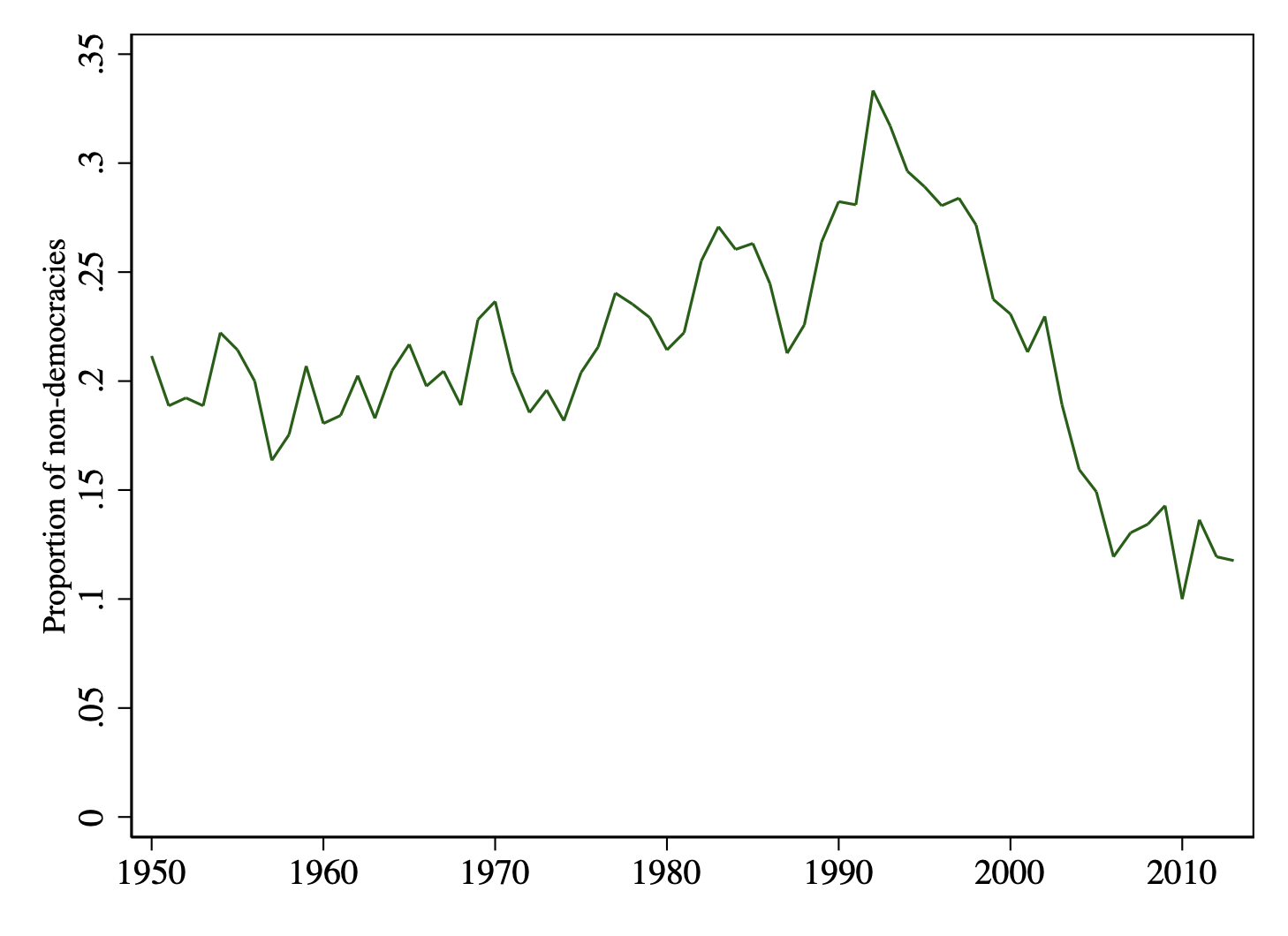 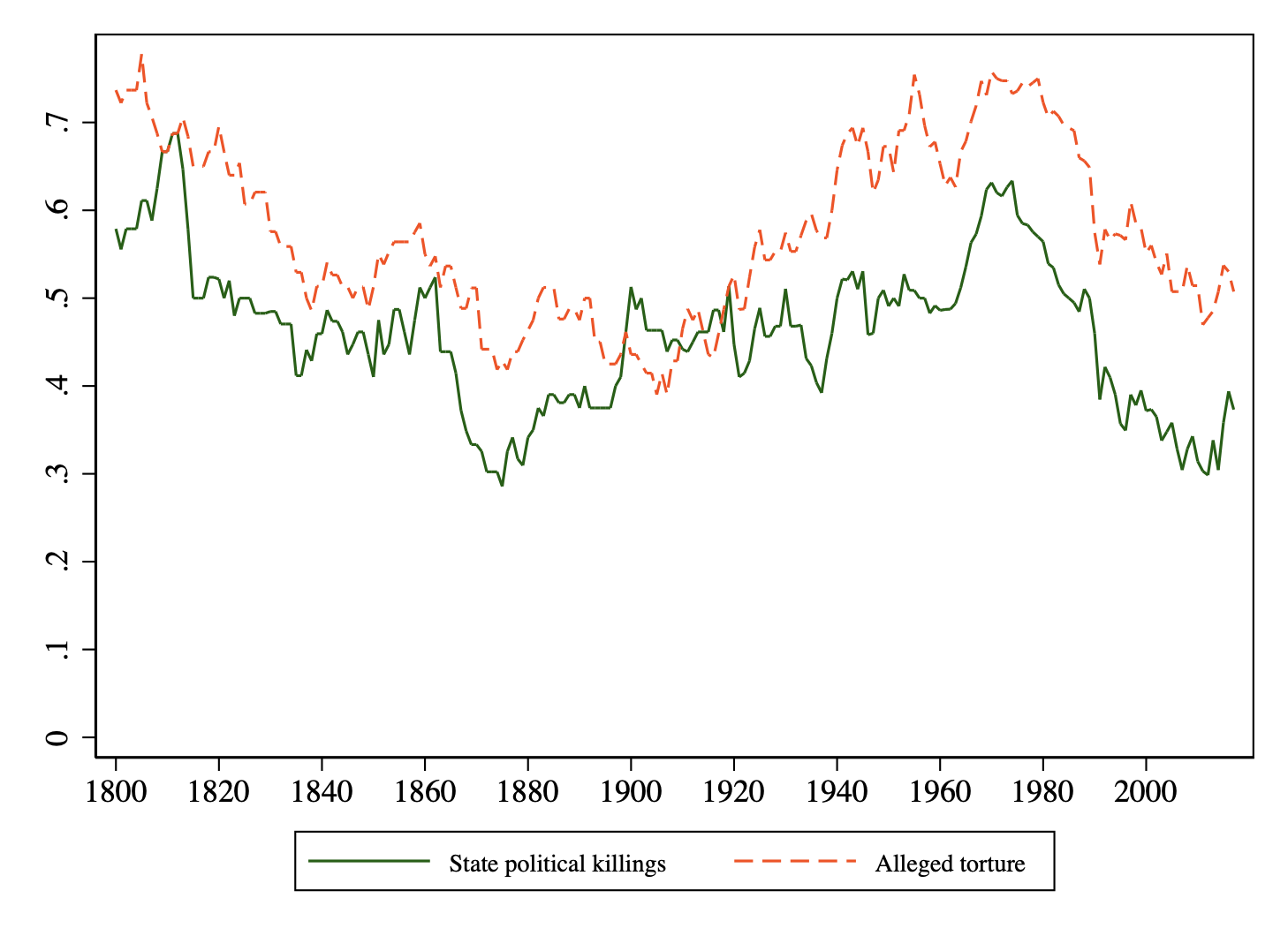 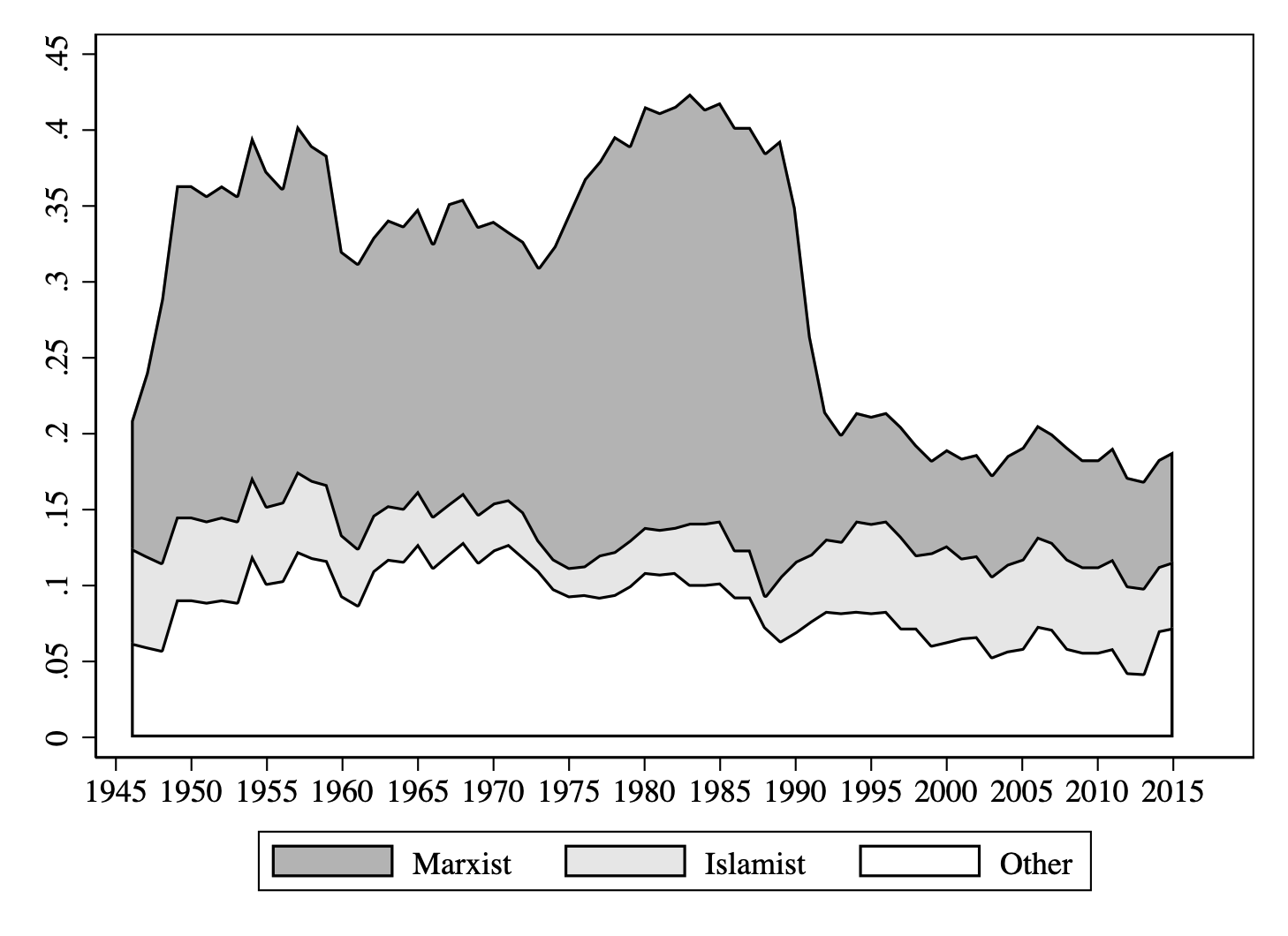 Figure OS3.1 Percentage of Non-Democracies with an Official Ideology 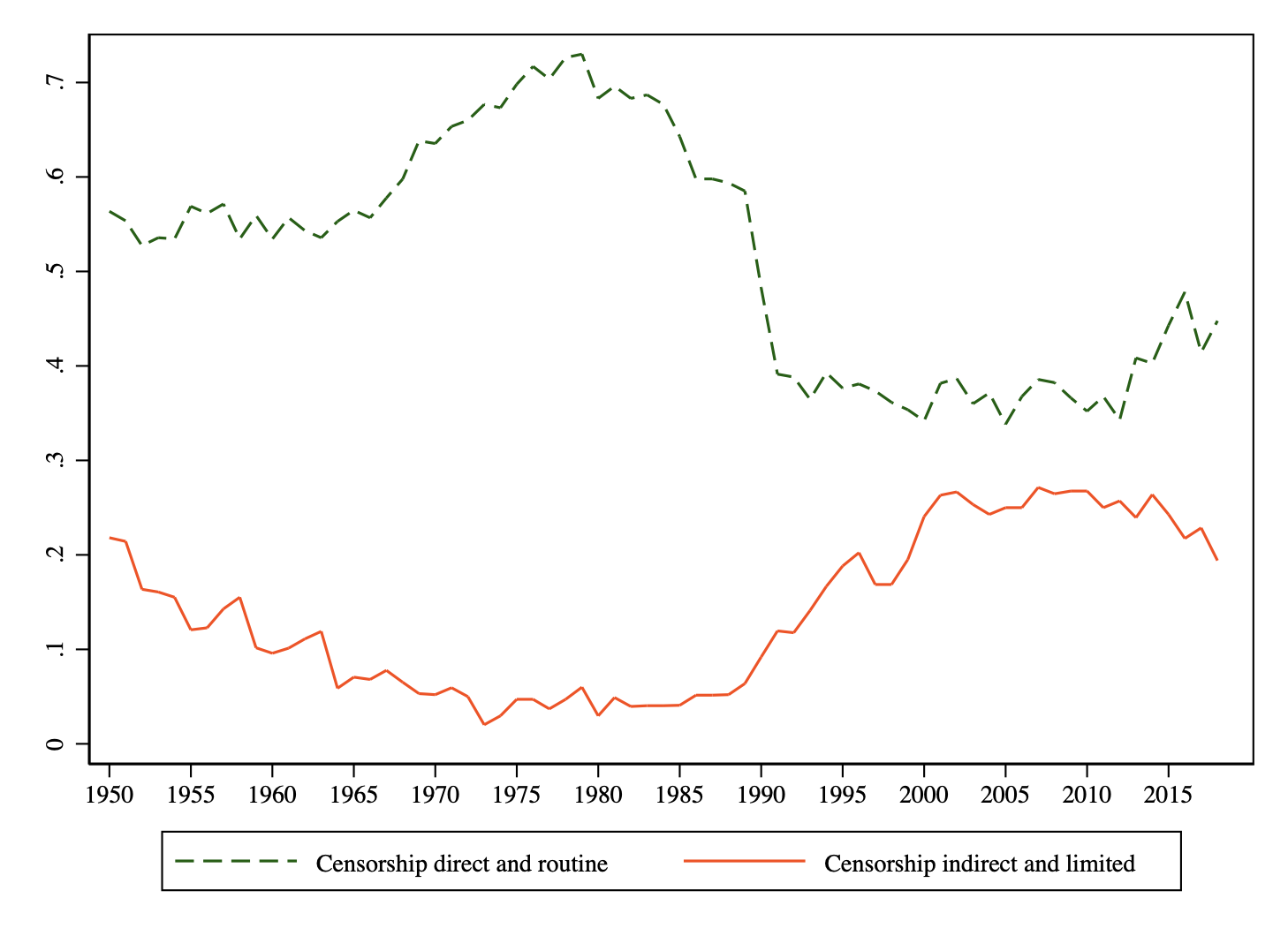 Figure OS4.1 Proportion of non-democracies with different types of censorship 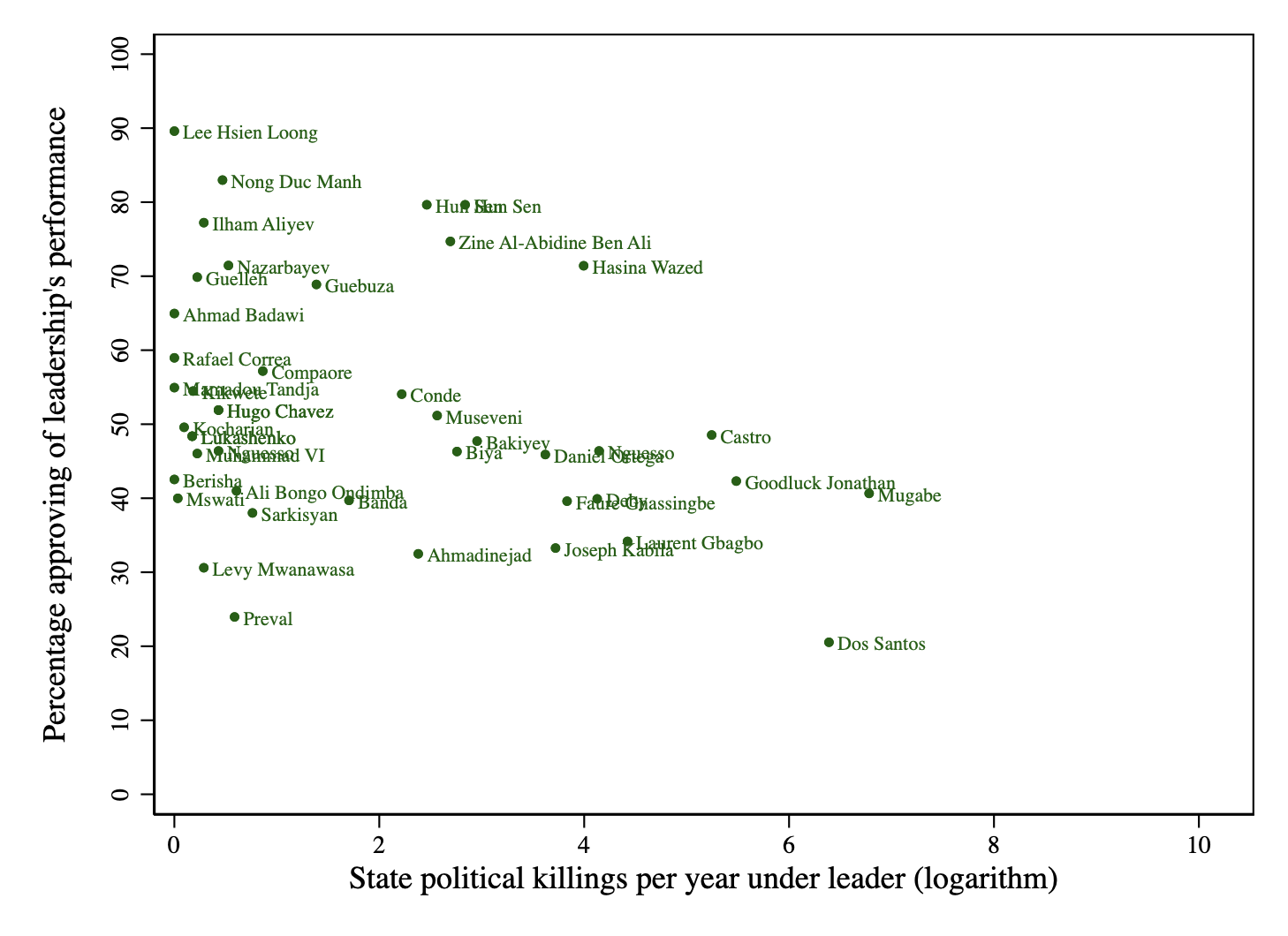 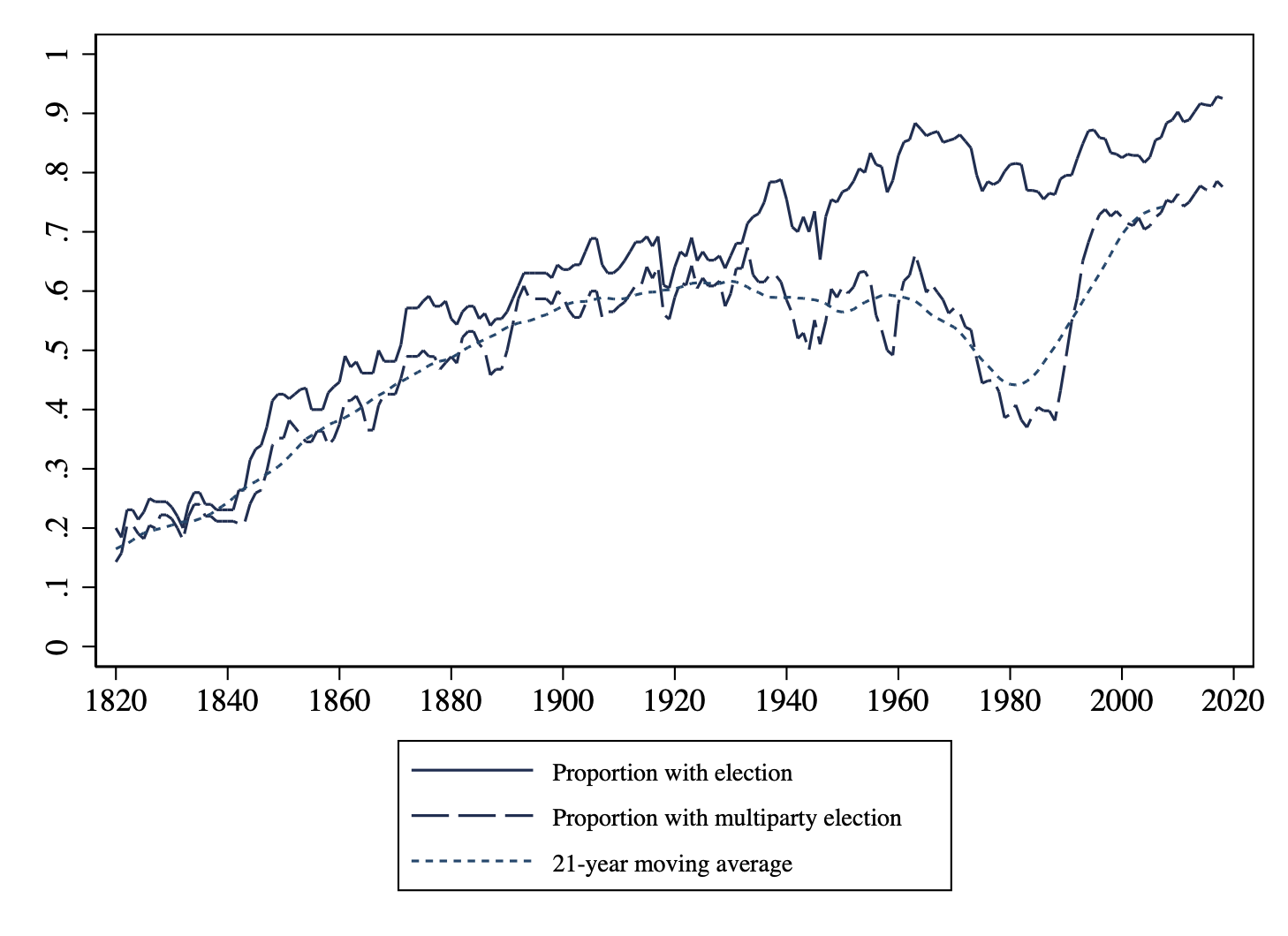 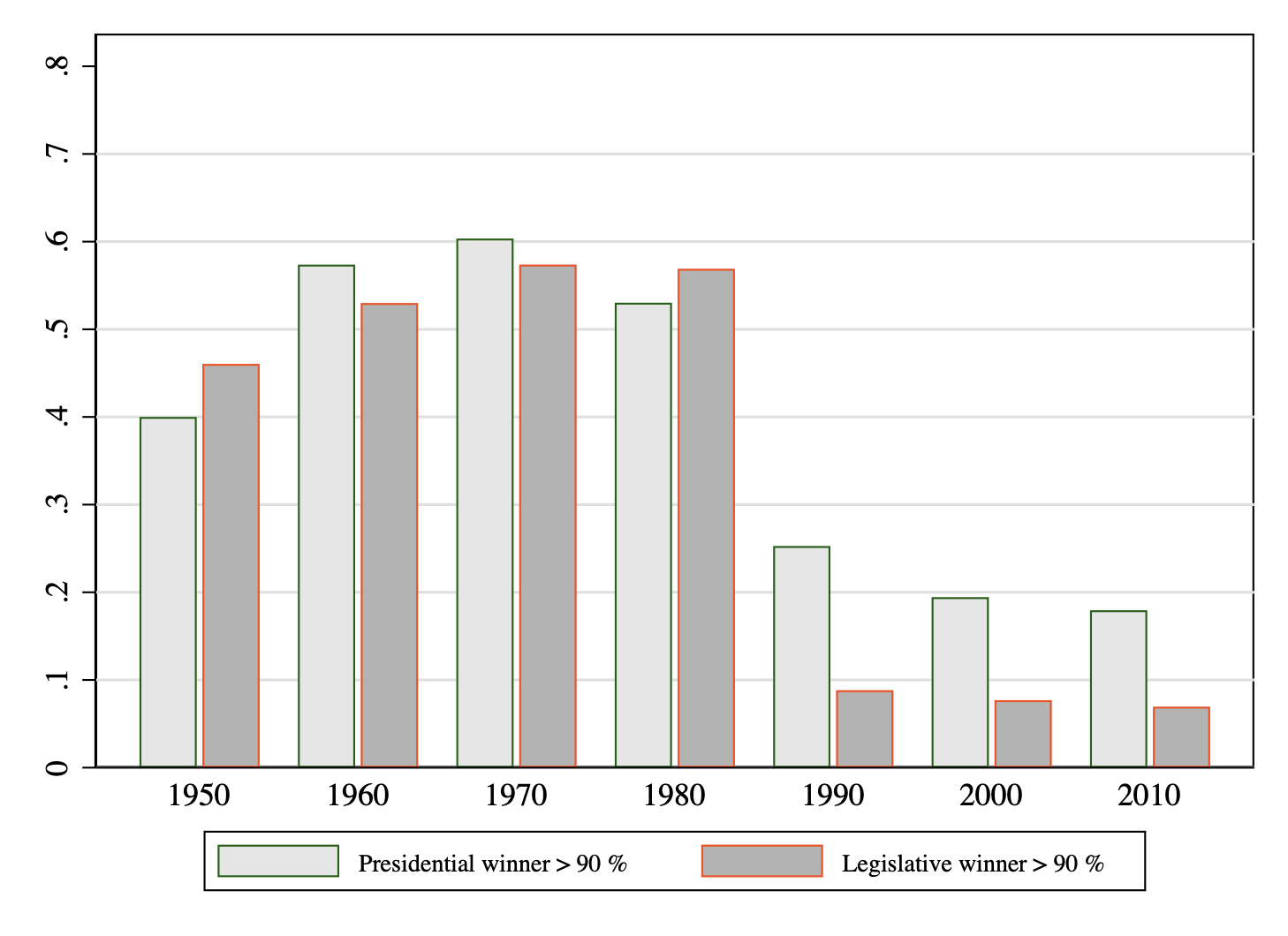 Figure OS5.2 Proportion of elections in non-democracies in which the winning candidate or party got more than 90 percent of the votes 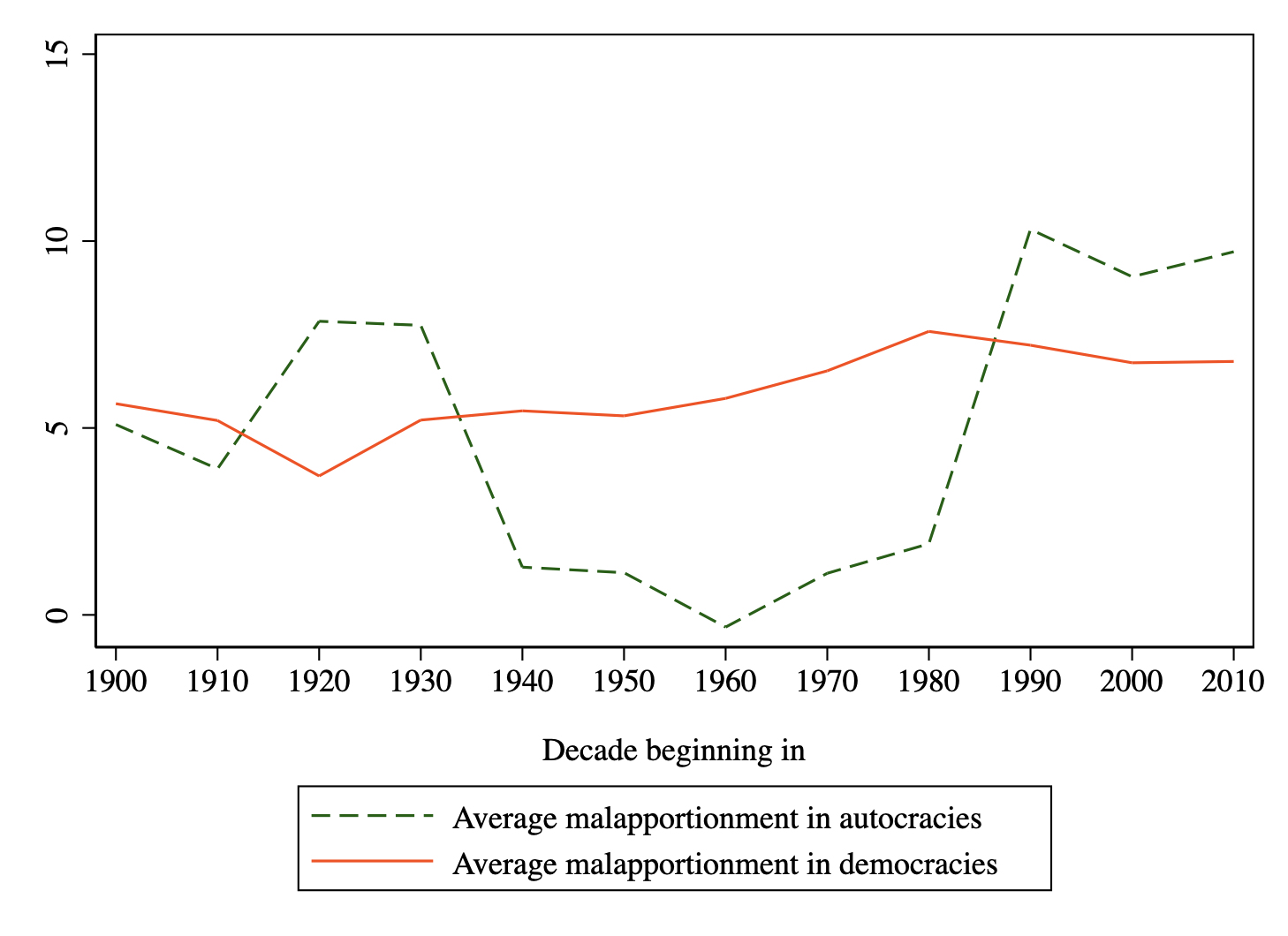 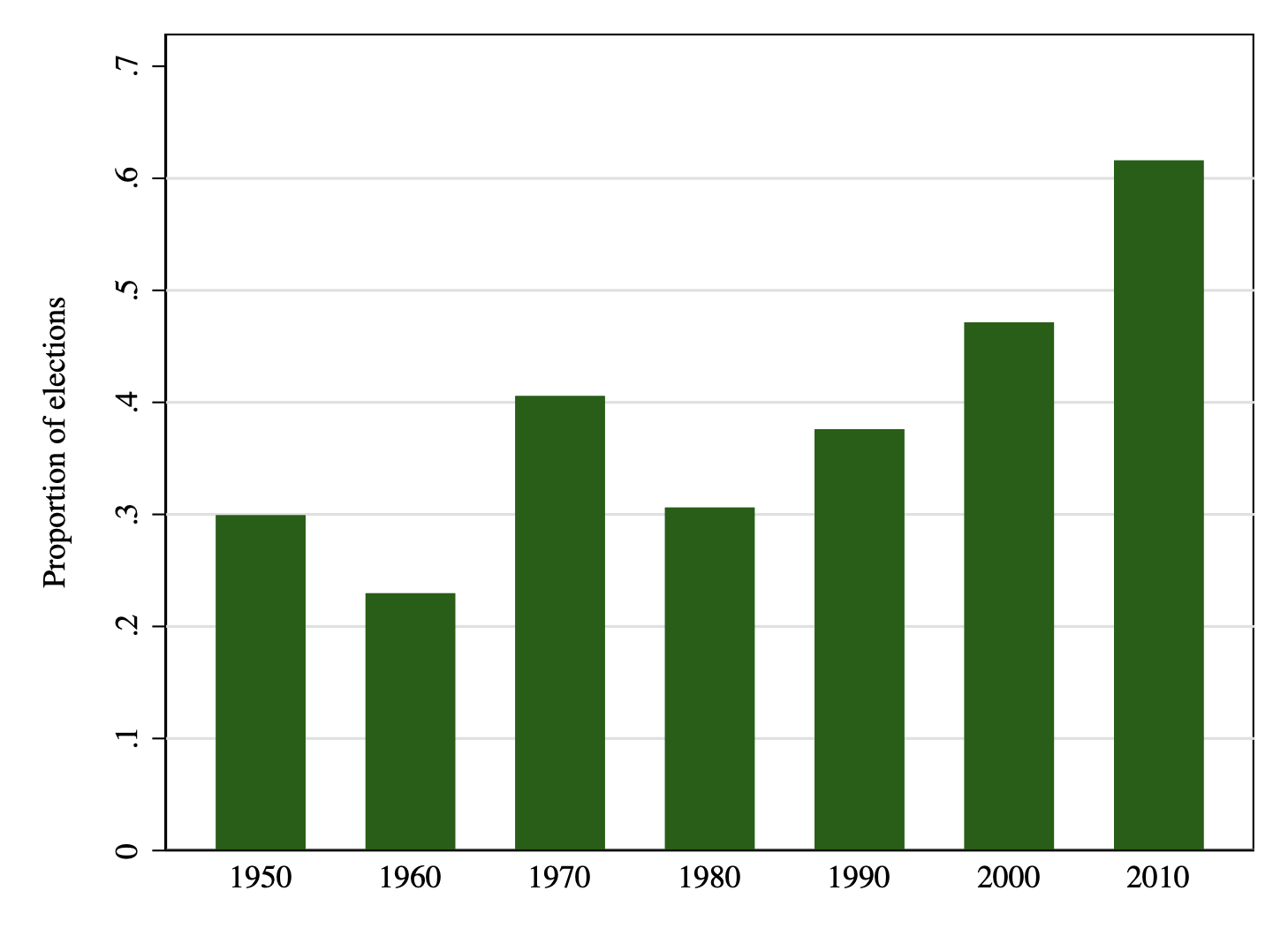 Figure OS5.4 Proportion of multicandidate elections in non-democracies where pro-incumbent media bias was alleged, by decade 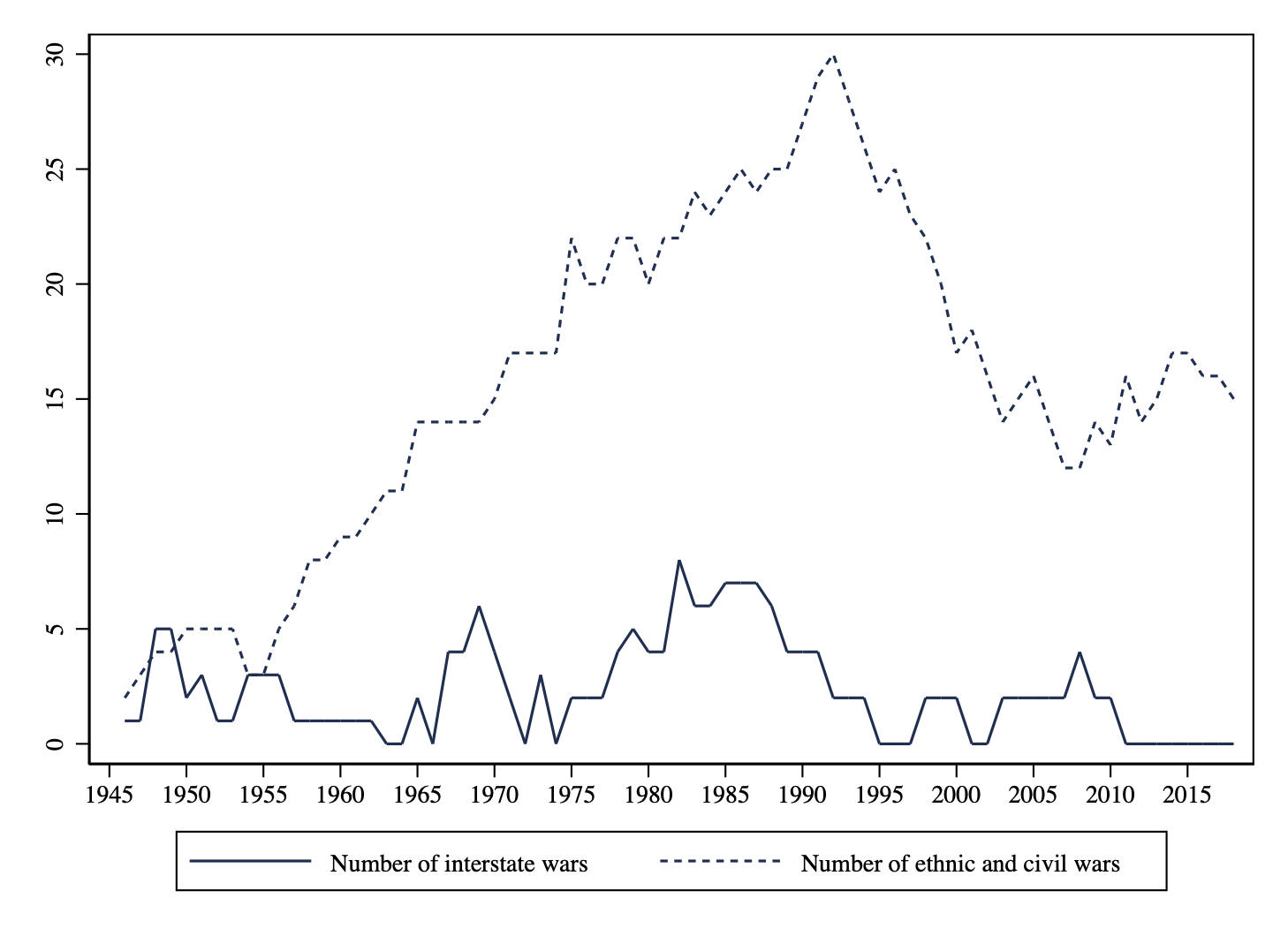 Figure OS7.2 Percentage of dictators with more than 10 and more than 100 state political killings a year, only those under whom there were no civil wars, insurgencies, or interstate wars 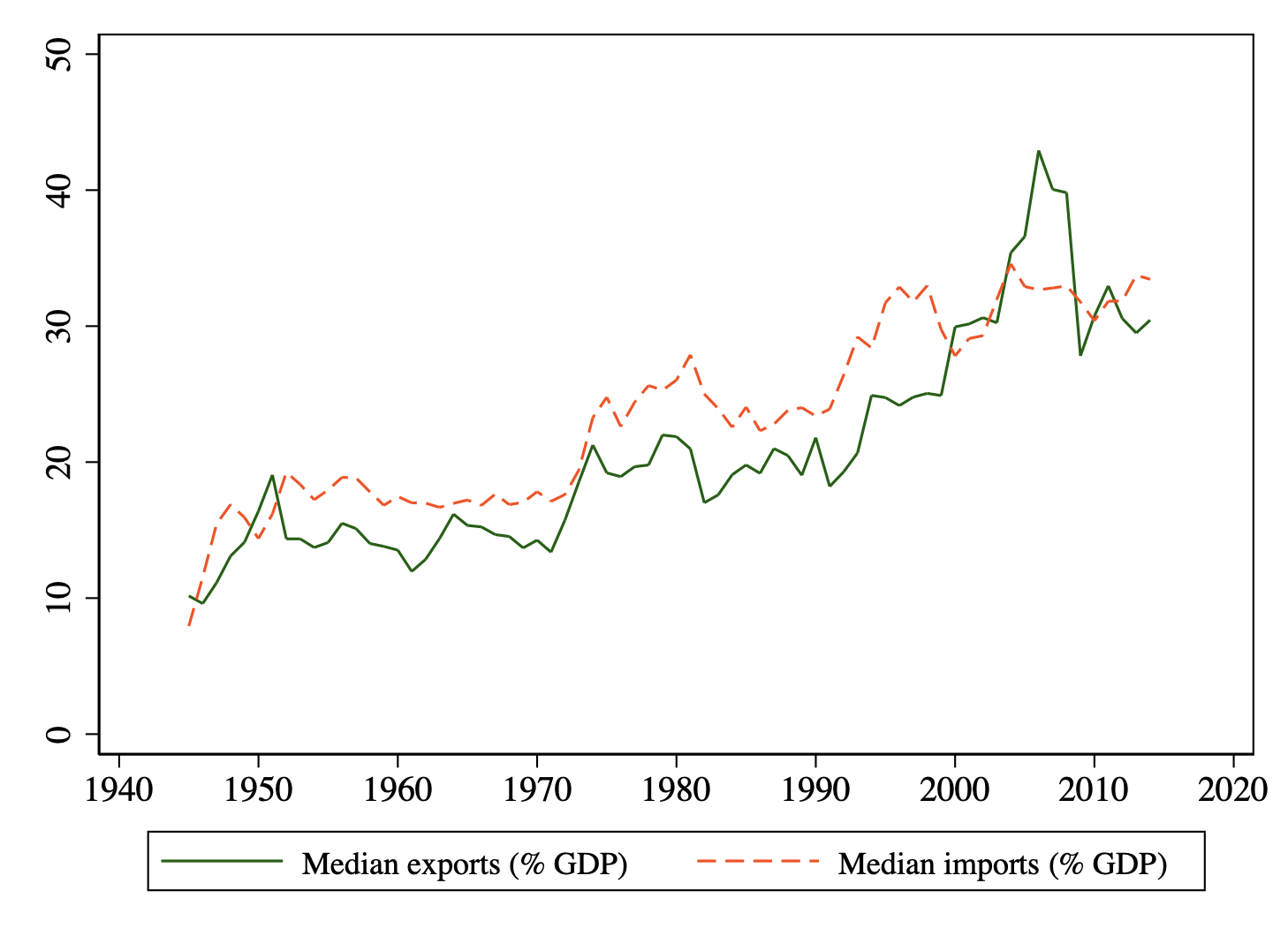 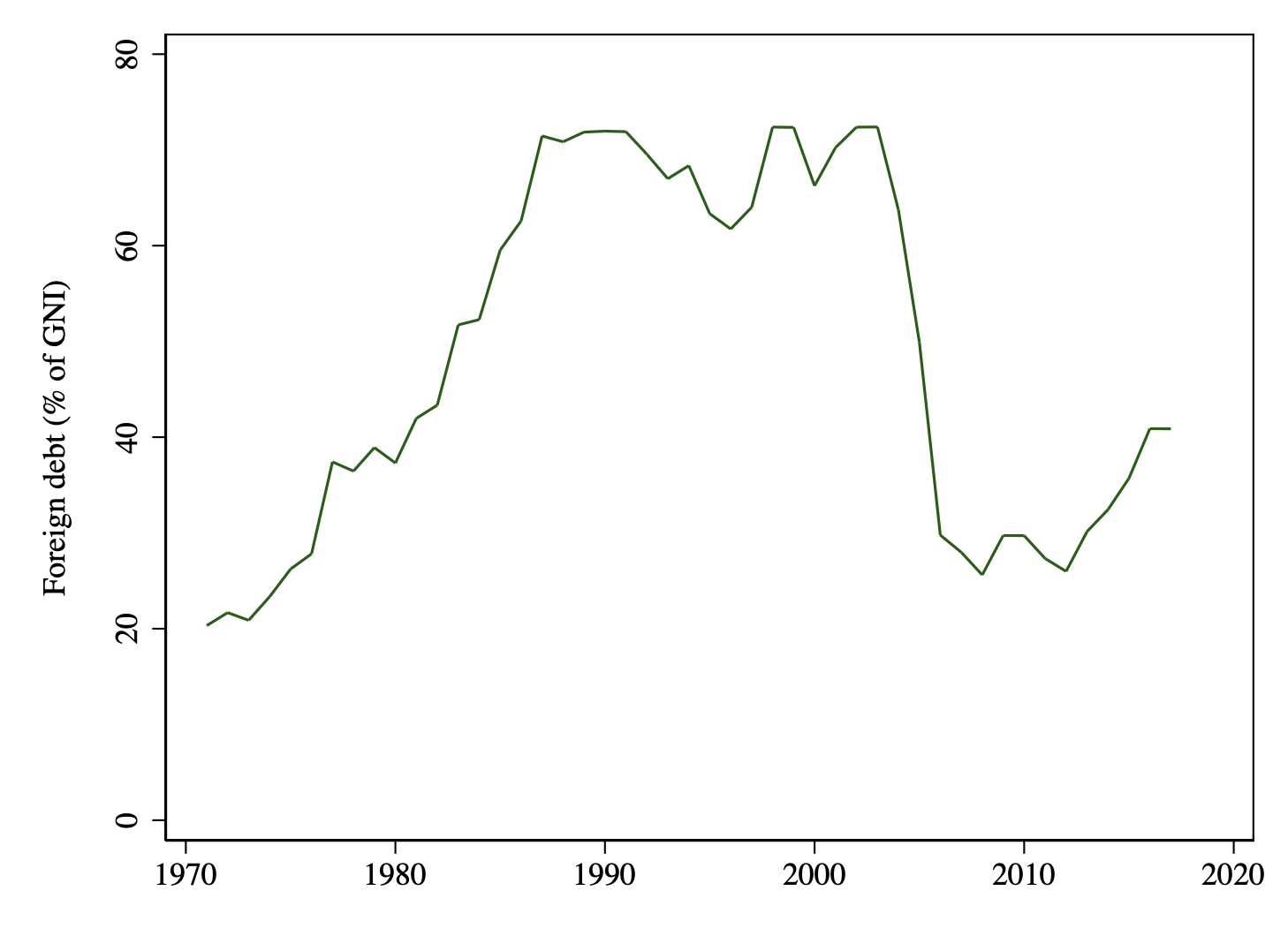 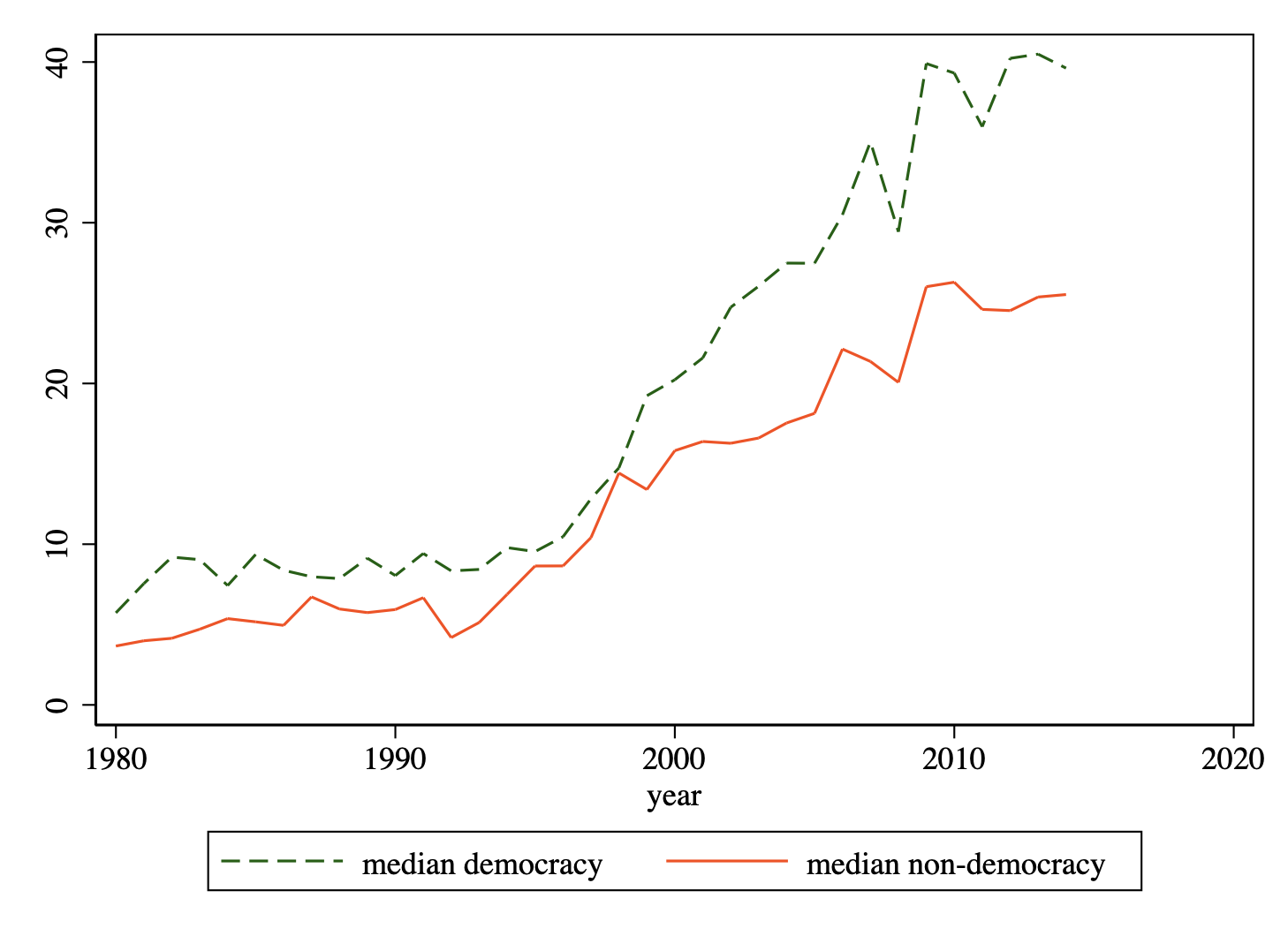 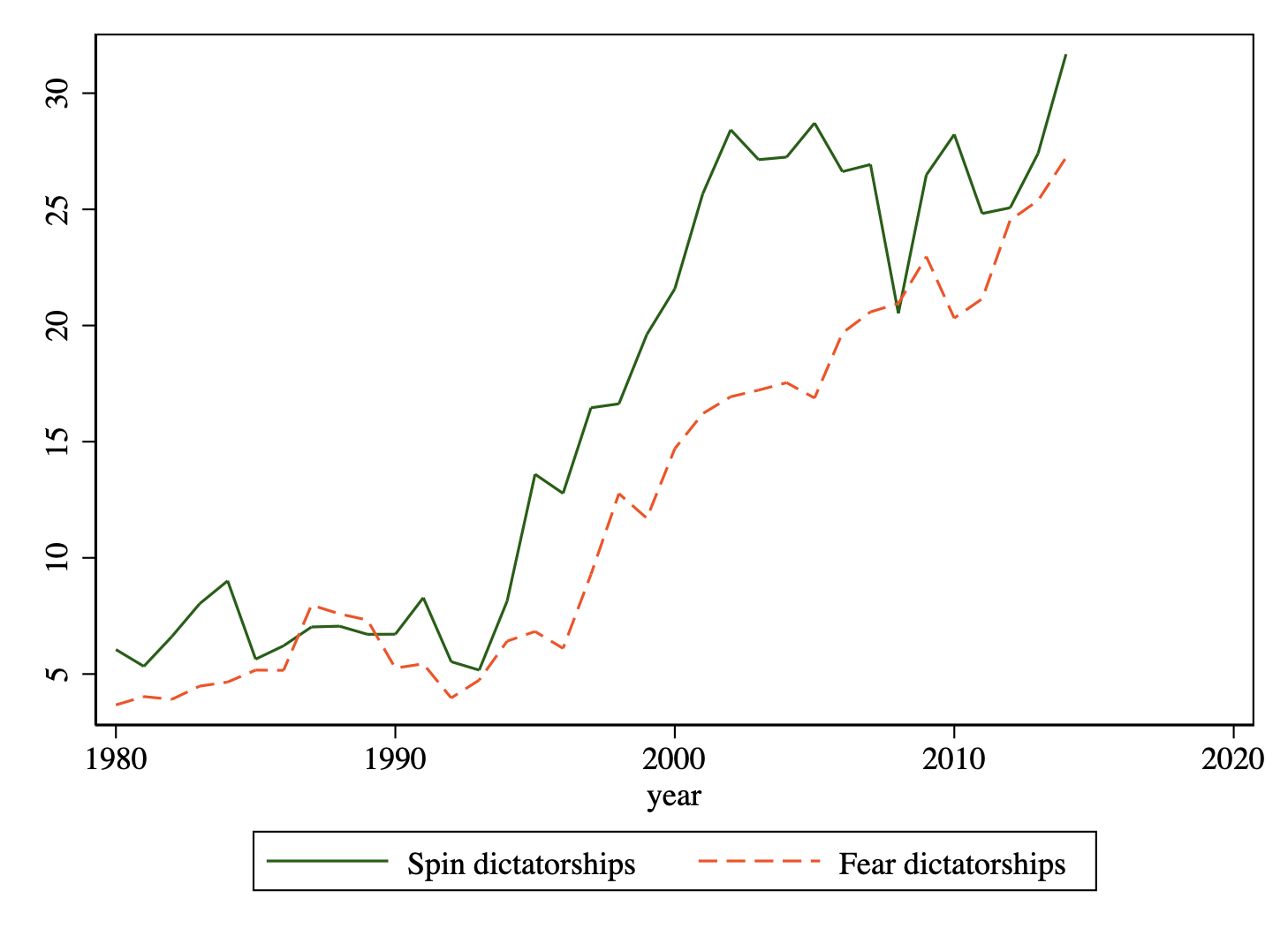